The practical meaning of visceral-cutaneous reflexes to pain investigations.

Standard opinions about chronic pain.
In today's opinion about pain we look for the sources of pain in organs, muscle tissue, tendons, bone, cartilage and connective tissue. With some kinds of pain also in damaging or jamming of nerve tissue. Is it not there then we think of psychical sources, once there was a pain source, caused by a disease of one of the tissues mentioned. The disease has been gone for long but the pain is remembered in the memory. Nasty, but you have to learn to deal with it because there is no possibility to delete. From old medical opinions this train of thoughts is understandable, the nervous system was considered an organ which does not recover after damaging. That is called a static system. Undoubtedly something of that will be true. However, modern investigation has determined the plasticity of the nerve tissue. That means that nerve tissue to a certain extent can recover. If not by recovery of the original structure then by recovery of function, healthy cells in the surroundings of damaged ones take over the function of the damaged. This may happen by training. Physically but also by psychological methods. The latter nowadays gets the most attention in pain treatment.

The biggest organ of the body as a source of pain does not occur in literature: the SKIN, while this is exactly the organ on which people indicate their pain spot. Doctors and physiotherapists push on those spots and think of structures hidden under them. What is the matter THERE? . A bit strange it is indeed. It suggests that the pain radiates upwards. Whereas on many spots the organ does not lie perpendicular under the skin which the patient indicates.
The development of the embryo during pregnancy already clearly indicates this. The nervous system develops from a tube that in a regular way constricts as blocks of a chocolate bar. There are 28 blocks. In principle there are 28 vertebrae, also blocks. The last four have grown together to the sacrum. Each block gets offshoots that make contact to other tissues which develop to organs, bone and connective tissue, muscles and skin. Everybody will recognize this as a computer with its own peripheral equipment. Sometimes this peripheral equipment and its computer are situated close upon each other, sometimes more than one meter apart from each other. The big toe matches computer L5. The fifth lumbar vertebrae matches that and the computer itself is situated much higher in the spinal marrow. 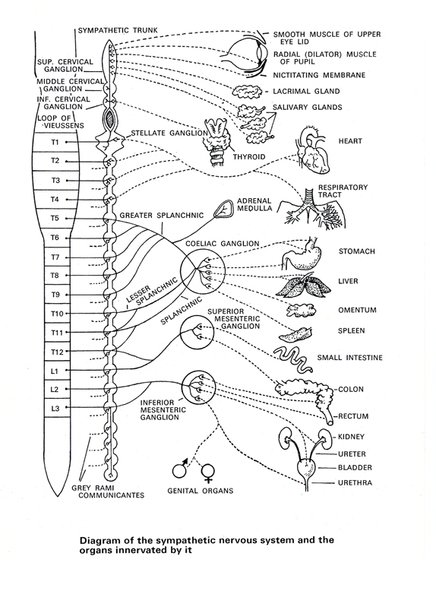 This way, among others, organs and their matching piece of skin are connected to each other. Each organ has its own skin area. Each skin area has its own temperature.
For instance, when the average skin temperature is 25 0 Celsius the temperature differences between the various skin areas may differ 10 0 Celsius from each other. Even on a small area as the abdominal skin such temperature differences occur. That makes sense. The skin is an organ that regulates human body temperature. If this would be regulated by just a central thermostat then the body temperature would remain up to the mark while somewhere an organ would become dangerously hot. It is just like a thermostatically regulated house with an alternating flow by radiation: the central thermostat regulates the activity of the boiler, but with only a central thermostat the kitchen could freeze while the bedroom is sweltering hot.
Local thermostats on the radiators or in the room to be heated then determine the local flow.
When the temperature changes in an organ then a signal goes to its computer in the spinal marrow, from there to the peripheral equipment, the skin radiator which also changes in temperature. That is called visceral-cutaneous reflex. Adjusting your home temperature on distance by internet can also be seen as a kind of visceral-cutaneous reflex. So far theory is willing but what about practice?

At the beginning of the previous century two Danes investigated visceral-cutaneous reflexes in transparent eels. Because they are transparent skin sensation could be observed in an organ under that skin. They showed visceral-cutaneous reflexes and the other way around. Begin fifties of the previous century investigations were done to the skin temperature of pain spots. About 70% of those spots were colder than their surroundings. This was not to be seen by the naked eye. Perhaps that was the reason that chronic pain was not recognized as a disease? Anyway, reason enough for further investigation.
In practice local injections in the skin with an anaesthetic appeared to be sufficient to interrupt or even to break off gallstone- and kidney stone colic's. The sharp pain in case of gallbladder inflammation and appendicitis changed into a sick fretful pain that could no longer be indicated. Very suitable for medical diagnostics. There were enough problems to be solved.

Indeed, man is not a transparent eel. Until 1981 there was no scientific proof that those visceral-cutaneous reflexes exist in human being, let alone that they could be measurable. Especially the latter would be conflicting to the existing neurological opinions. So the first thing that should be demonstrated if you wanted to say something about painful spots on the abdomen is that visceral-cutaneous reflexes exist and are measurable. Eventually it would be made visible that pain is transferable and measurable. With that the foundation of the scientific part was laid.

Catheterization At the beginning of the eighties infra-red measuring equipment was brought upon the market, made suitable to measure skin temperature at a distance. The equipment was expensive and had to be cooled by liquid nitrogen. On the other hand measuring could take place without too many problems. The cost became the determining factor. After negotiating intensively a Dutch manufacturer , Philips Medical Systems in Best, appeared to be willing to put equipment at disposal not for orientating investigation. Remarkable images were made but the medical scientific meaning was small. It was not clear whether these were artificially obtained images or not. After all, the visceral-cutaneous reflexes had not been proven yet. In order to find this out two projects started: regularly measuring the abdominal skin temperature of pregnant volunteers during the course of the pregnancy and measuring the abdominal skin temperature at inserting IUD's.
Both investigations lasted one year. After processing the IUD investigation it became clear that a small skin area which according to the literature could be brought into connection with the uterus had a statistically significant temperature increase. That was only 0.2-0.4 O Celsius. When checking the temperature remained about 0.2 O Celsius higher than before insertion. At replacing the IUD the temperature increased less, about 0.2 O Celsius and then slowly decreased to the starting temperature. So with both groups the abdominal wall temperature remained 0.2OCelsius higher than before insertion. By this the existence of visceral-cutaneous reflexes at human being was confirmed. That implies that other vascular widening processes in the uterus might be indicated. For instance, a hardly ever occurring complication with IUD's is an inflammation of the uterus mucous membrane. This could be observed by infra-red Thermography if the point of departure is known. Then the temperature should increase. During the check-ups after insertion that has not been observed and clinically no inflammations have been observed.
The pregnancy investigation during that time could not statistically be adapted. The impression indeed was that there was a difference between normal and problematic pregnancies. In 2013 the results were tested by modern statistics. Significant was a temperature decrease in the 34th week which continued until delivery. So obviously landing starts from week 34. For many years efforts were made to confirm that start by body temperature measurement.
Literature does not say such a thing has been successful yet. Neither a difference has been found between normal and not normal developing pregnancies, but possibly as a result of an insufficient number of volunteers. These temperature changes had to be brought about by visceral-cutaneous activity. Publications appeared to be impossible in those days. It had been tried many times but without any success. There were various reasons for this. Eventually the lack of time necessary for text processing and further literature investigation were too much a burden for the practice. Only in 2013 publication in a Peer reviewed scientific magazine was possible.
In the meantime the results were applied in practice. Although it is probable that pain then is being transferred this has not been confirmed by this investigation. Only in 2008 a publication appeared from a Danish investigation group that also has confirmed pain transfer from an organ measurable on the skin by infra-red Thermography. Up till now no investigations were found that indicate the contrary.
The finding described in the orientating part most likely is not an artefact but a realistic observation. That makes it possible in case of pain complaints to determine the kind of activity of a concerning organ and if necessary test it, for instance with regard to the presence of chronic pain or scars. The temperature of the pain spot in case of chronic pain plays a role there. In order to get to know more about this two pharmacological investigations have been done .
Scientifically explanation on the Science Page.

They posted on the same topic